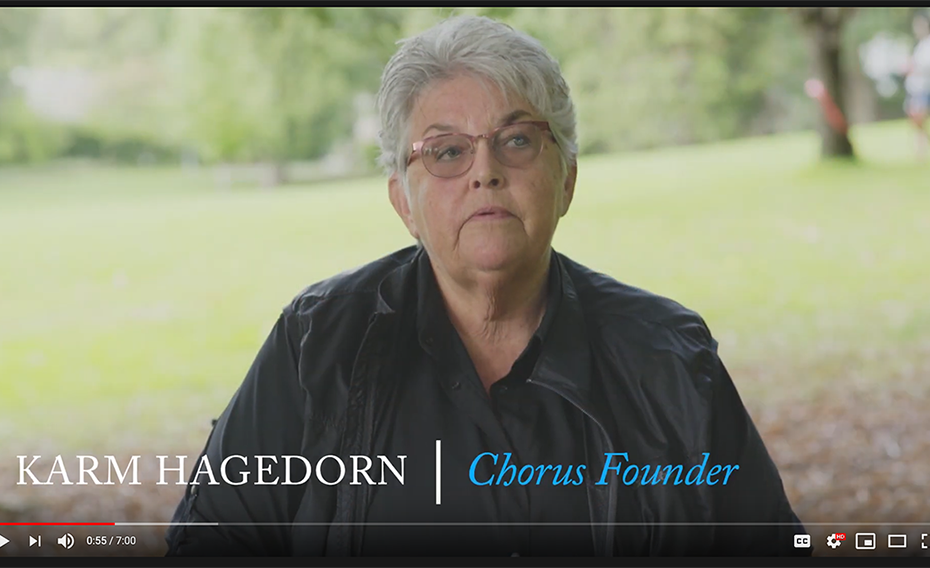 Choir member Lisa Williams had a vision; she wanted to create a video that would broaden Soromundi’s reach and give our audience a glimpse into the heart of the chorus. She brought her idea to a board meeting — not hard to do since she’s a member of the board — and was given an okay to begin exploring costs. Soon after, choir members Dawn DeWolf and Kate Barry found a grant opportunity from the Lane County Cultural Coalition that seemed like a perfect fit for the goals of the project. The Soromundi grant team applied for and was given a grant from LCCC, and so, the project was born.

As Lisa quickly learned, it takes a lot of work to make even a short video. In the initial stages of the project Lisa worked with Mary Robertson and D Ann Williams (no relation) to develop a strategy for making and marketing the video. Lisa then began working with the videographer, Rick Gates, to develop a plan for filming Soromundi’s 2020 winter concert, as well as a series of face-to-face interviews with Soromundi’s founder, director, and choir members past and present.

And as Lisa was interviewing, I was watching concert video footage to try to make some suggestions about clips that might be included. After viewing an initial draft of the video, I sent Lisa an email asking her about the process of creating it. Here are a few of her responses:

LH: What was it like for you, doing the interviews?

LW: The interviews were by far the best part of the process even though they were also the most time-consuming. All of us share such a profound love and respect for this chorus community and Lisa [Hellemn]’s direction of it, and hearing people talk about that, about their memories and about how the chorus sustains them, was just such a good reminder of why we must work to ensure that this group continues. Even though we knew we were going to use just tiny snippets from each interview, we asked multiple questions of each person, and combined, those interviews painted a very sweet portrait of a very beloved community.

LH: How about working on the video?

LW: The video work itself was a little intimidating even though I felt like I had a solid concept of what we were doing. I had never “produced” anything like this and so knew there were many steps, including, at the very least, selecting interview and concert clips to use, placing them in some coherent order, figuring out if any still images would be useful, etc…

LH: Finally, what do you hope the video will help accomplish?

LW: I hope this video gives viewers, and especially those unfamiliar with Soromundi, a solid sense of the very unique and special nature of this community. People draw so much strength and support from this group, and we are lucky enough to have a founder (Karm Hagedorn) and a director (Lisa Hellemn) whose visions have been all about not just music but also allowing people the space and safety to just be themselves. In a society that is at times so strikingly and painfully unwilling to accept anyone or anything unfamiliar to them, the value of that can’t be overstated. This video gives a quick and moving glimpse into the world of Soromundi, and having a video in particular allows us to reach out more easily via social media, which will hopefully increase the demographic breadth of our audience.

Thanks to Lisa and to everyone else who helped to make this video possible.

A message from Soromundi’s Board and Director: