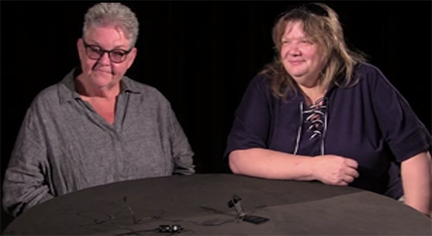 Several past and present Soromundi members are featured as part of a local oral history project designed to preserve the rich history of the Eugene lesbian community.

Included among the interviews are Soromundi founder Karm Hagedorn and choir director Lisa Hellumn, who gave a joint interview for the project. Karm founded the Soromundi Lesbian Chorus of Eugene in 1989. In the interview, she and Lisa discuss various aspects of directing Soromundi and the reception of the chorus in Eugene and Springfield. Karm discusses the dynamics of the choir and the problems associated with managing a large group of people, many of whom are strong-willed. Lisa discusses leading by example. They reminisce about the kinds of music the choir sang, the choir’s meager finances, and how Soromundi became a non-profit in 1991.

According to the website, the Eugene Lesbian Oral History Project collections consists of video interviews of 83 women who identified as lesbians when they came to Eugene between the 1960s and the 1980s. The interviews were conducted at the University of Oregon by Judith Raiskin, Associate Professor of Women’s, Gender, and Sexuality Studies, and Linda Long, Manuscript Curator, in the summers of 2018 and 2019. The video recordings and transcripts are available online and can be searched by subject. Related documents, photographs, letters, journals and ephemera are housed in the University of Oregon Special Collections and Archives.
Tags:communitynewsletter
A message from Soromundi’s Board and Director: